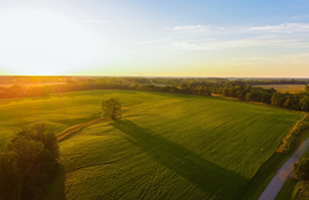 Another tussle between landowners in eastern Ohio and the holders of mineral rights has made its way to the state’s court of last resort. An heir to mineral rights under 108 acres in Guernsey County is staking a claim against the property owners, who took back the mineral rights in 2012.

The dispute, which the Supreme Court will hear next week, has drawn amicus briefs from onetime or current mineral rights holders and groups of property owners – from Belmont, Guernsey, Jefferson, and Monroe counties. The Ohio Farm Bureau Federation, Guernsey County Farm Bureau, and Ohio River Collieries Company also have filed amicus briefs in support of the property owners in this case.

The mineral rights were split from the Guernsey County property in November 1961. Jane Richards’ father transferred the minerals rights (oil, gas, and coal) to her in 1965. When Richards died in 1997, her son, Timothy Gerrity, inherited her real estate interests.

John and Gloria Chervenak bought the surface property in 1999. The Chervenaks wanted to merge the property with the mineral interests. In 2012, they searched Guernsey County records and found Richards was the “record holder” of the mineral rights under their land. They sent a notice by certified mail to the Cleveland address listed for Richards in the records, stating that they planned to declare the mineral rights abandoned.

The notice was returned undelivered, so the Chervenaks published a notice in The Daily Jeffersonian newspaper. When there was no response, the couple submitted an “affidavit of abandonment” with the Guernsey County Recorder’s Office, and the title to the mineral rights transferred to them.

In 2017, Gerrity sued John Chervenak, the trustee for the family’s trust. Gerrity alleged that he wasn’t properly notified of the Chervenaks’ actions and he still owned the mineral rights. The trial court, however, granted summary judgment to Chervenak.

The Seventh District Court of Appeals upheld the trial court’s decision, and Gerrity appealed to the Ohio Supreme Court, which accepted the case.

Read More: Tug of War over Ohio’s Oil and Gas Riches Rolls on

Why Oil Prices Didn’t Rally After The OPEC+ Extension | OilPrice.com

‘It is going to be brutal’: What to expect as oil and gas majors unveil