However, not all oil producers are ready to pump at full capacity just yet. That caution shows their skepticism in oil’s recent rebound, which some producers think has gone too far, too fast. 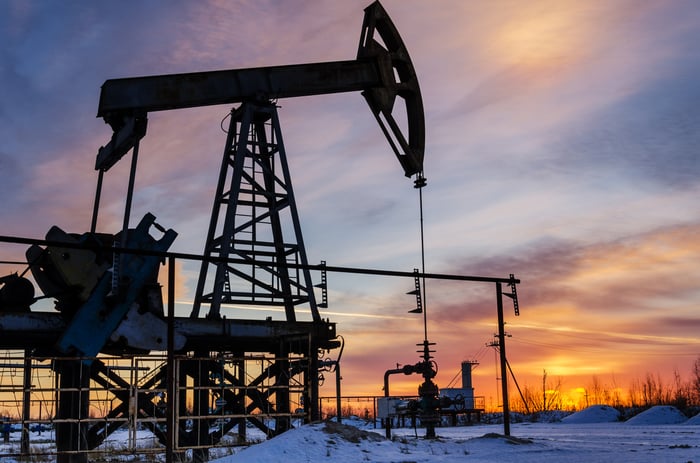 Continental Resources (NYSE:CLR) delivered one of the biggest production curtailments in the U.S. oil patch earlier this year, when it shut-in 70% of its output in May. That was a major shift for a company that had grown its total production by 9% year over year during the first quarter to an average of 360,800 barrels of oil equivalent per day (BOE/D). However, with crude prices crashing because of cratering demand and a lack of storage capacity, Continental started shutting down its operations since it didn’t have any hedging contracts to protect its production against lower prices.

While crude prices have surged since it began shutting down its pumps — West Texas Intermediate was recently back above $40 a barrel — Continental isn’t ready to resume its full operations. Instead, it expects to keep more than half its output curtailed this month by only producing an average of 150,000-160,000 BOE/D. Meanwhile, it plans to push July’s output level to around 225,000-250,000 BOE/D, assuming no significant change in crude prices. The company expects to continue restoring its production in subsequent months as the oil market and crude prices continue improving.

Skeptical of the rebound

U.S. oil giant ConocoPhillips (NYSE:COP) also curtailed a significant amount of its production to combat lower oil prices and storage issues. It initially expected to shut in 100,000 barrels of oil (BPD) of output in Canada by May while cutting its U.S. oil output by 125,000 BPD during that month. However, it unveiled deeper cuts toward the end of April. For May, it expected to curtail a total of 265,000 BPD by shutting in additional volumes in the contiguous 48 states. On top of that, it planned to hold back 460,000 BPD in June — roughly a third of its total output — including 100,000 BPD from its Alaska operations and additional curtailments in the lower 48 states.

The company plans to start bringing some of those volumes back online. CEO Ryan Lance stated in an interview with IHS Markit in early June that “we’re probably thinking of slowly coming back into the market over the next few months and slowly reducing the amount we have curtailed because of some strengthening in the price.” Alaska is the first place it expects to restart as it plans to resume normal operations in July.

However, the company was a bit surprised by how quickly oil prices bounced back, since market…

Read More: Despite an Epic Rebound in Oil Prices, Some Producers Are Cautiously

Here’s Why ConocoPhillips is Planning to Raise Production