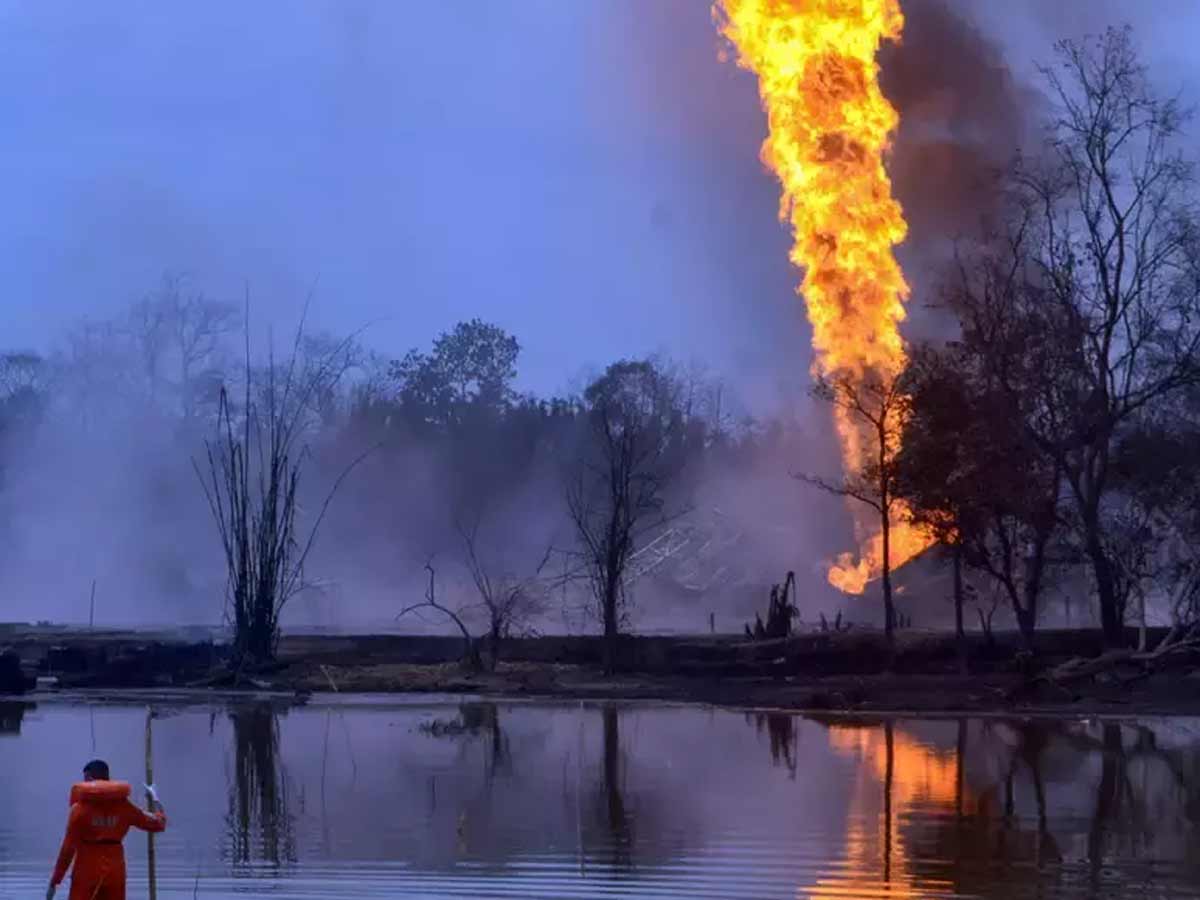 Guwahati: Efforts for dousing the raging fire at the damaged Baghjan gas well in Assam’s Tinsukia district continued on Thursday as debris clearance activity was undertaken and necessary equipment made ready at the site. The Oil India Limited (OIL) said the debris clearance activity with continuous spraying/jacketing of water in the well plinth or debris is underway since Thursday morning.

Four loads of debris were removed from the well plinth on Wednesday, it sad.

The OIL said four loads of debris from the laydown area have been transferred to the designated location at Duliajan to create space for laying the debris from the blowout well plinth.

As part of readiness of equipment at site, an OIL press release said refilling of water reservoir to maintain the desired water level is being carried out by pumping water from Dangori river.

Floods, however, continue to pose problem by disrupting road connectivity to the oil site.

The OIL said only one road (Plastic Park Maguri Beel side) is at present available for movement of heavy vehicles to the well site.

The repairing work of the alternative road (Talap Kordoiguri Bandarkhati-Bhaghjan EPS) for entry into Baghjan EPS and the connectivity to the well resumed after blockade was lifted Wednesday evening, the release said.

The well number 5 at Baghjan has been spewing gas uncontrollably for the last 37 days. It caught fire on June 9 killing two of OIL’s firefighters at the site.

Depending on the requirement, fabrication and repairing jobs are being carried out at the temporary workshop created near the site, it said.

The Second Excavator attached with hydraulically operated Rock Breaker Unit was transferred to the site on Thursday, while other equipment and materials are being transferred in a phased manner depending on the requirement and site condition, the OIL said.

Stating that the Environmental Impact Assessment by M/s ERM is in progress, the oil exploration major PSU informed that the study will continue till one week beyond the date of capping the well successfully.

It said TERI study on air quality and noise level, bioremediation of sludge and CSIR-NEIST seismological study are also on.

As part of relief and rehabilitation, the release said surveys for assessment of damage for compensation by the committee constituted by district administration are in progress.

Assessment for 32 more families were conducted on Wednesday in Doomdooma Circle, taking the total number of families surveyed till date in Doomdooma and Tinsukia Circle to 752.

On the impact on oil/gas production due to protests, stoppage/blockades, OIL said there was production loss of 47 MT of crude oil and 0.02 MMSCM of natural gas as reported on Thursday.

Operations were disrupted in four oil wells and cumulative production loss since May 27 last due to bandhs and blockades are 9,019 MT crude oil, 11.57 MMSCM of natural gas, it added.