There is perhaps no other raw material as ubiquitous as palm oil, yet so little discussed in a market as big as China.

The oil palm provides higher yields than any other vegetable oil crop and accounts for 35 per cent of global food oil production. Its oil can be found in almost half of all products on supermarket shelves, from packaged foodstuffs to cleaning products and cosmetics. It is also used as a fuel: until recently, the EU and US promoted its use as a biofuel to reduce carbon emissions.

But rising production and demand in the past 20 years has led to faster felling of forests to make way for plantations in Indonesia and Malaysia, the main producer nations. Many of the trees stood in peat swamp forests, which are hugely efficient stores of carbon.

When these forests are cleared, the peat dries out and carbon is released. For years, the peatlands of Indonesia have been releasing as much carbon per year as the entire state of California – meaning that biofuel policies designed to cut emissions have had the opposite effect.

Since 2005, forest fires caused by clear-cutting have become uncontrollable annual events. Forest loss also deprives many wild animals, including orangutans, of their habitats, threatening their survival. And then there are the issues of land expropriation and child and forced labour associated with the palm oil supply chain.

Last year, the EU decided to phase out palm oil-derived biofuels by 2030. In both the EU and US markets, sales of certified sustainable palm oil, which uses third-party oversight to at least partially bar environmentally, socially and economically harmful practices, are on the rise.

But the issue of the sustainability of any commodity cannot be discussed without looking at the huge Chinese market. Palm oil is no exception.

Ranked by nation, China is already the world’s second-largest importer and third-largest consumer of palm oil, despite not having any binding policy on biofuels containing it. All that the country consumes is imported: an average of 1 million tonnes a year were brought in during the 1990s, but in 2000 that started to increase rapidly, and in 2018, it stood at about 6.8 million tonnes.

According to customs data obtained by the China programme of CDP, a non-profit working on environmental information transparency, China imported 8.49 million tonnes of palm oil in 2019 – about 17 per cent of global imports for the year. 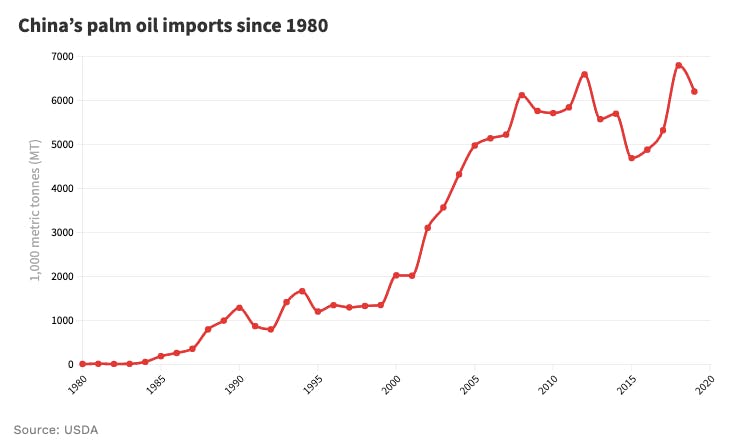 That sudden increase is commonly attributed to China replacing soybean oil with palm oil due to its ongoing trade war with major soy producer the US. But Khor Yu Leng, a Singapore-based political economist who studies palm oil issues, told China Dialogue that the role of the trade war has been exaggerated.

She argues that instead, one of the main causes has been the African swine flu, which has reduced demand in China for soybean meal, a by-product of soybean oil production. Without the demand for soy as an animal feed, soybean oil has less of a price advantage over palm oil.

In the long term, the country’s demand for…

BP Lowers Oil Outlook. Expects to Take up to $17.5B Writedown