Norway-based energy intelligence firm Rystad Energy said Tuesday it didn’t expect any new FPSO orders this year, however, it expects the situation will improve next year when it foresees seven new FPSO to be ordered.

“Hit by the second industry downturn in five years, global awards for floating production, storage and offloading (FPSO) vessels will likely be limited to a single unit in 2020, Rystad Energy believes, as exploration and production firms slash budgets and activity. Similar to the previous downturn, awards are set to recover next year, with seven projects likely to be sanctioned,” the company said.

Rystad said that Modec won the only contract so far awarded in 2020, to deliver a new-built FPSO for Woodside’s Sangomar development in Senegal.

The vessel, which will be the first FPSO to operate in Senegal, will be supplied on a turnkey basis and feature topsides capable of handling 100,000 barrels per day (bpd) of oil and 130 million cubic feet per day (cfd) of gas. Rystad Energy estimates that the total greenfield capex for Sangomar phase 1 will be around $4.2 billion.

Worth noting, Malaysia’s Yinson and Brazil’s Petrobras signed in March the firm contract for the Marlim 2 (Anna Nery) FPSO, however, Rystad’s graphs (below) shows this order as signed in 2019, possibly because the letter of intent was signed in 2019, and thus the FPSO deemed to have been awarded last year and not in 2020.

“For the remainder of 2020, we don’t expect to see any new FPSO contracts being awarded. Over the last 10 years, only 2016 saw a lower level of activity when not a single FPSO contract was awarded. However, from 2016 activity quickly rebounded with 27 awards in the three-year period from 2017 to 2019.”

“This time too, we expect to see a speedy comeback in FPSO sanctioning with seven projects expected next year, including Bacalhau and Mero 3 in Brazil and Payara (Prosperity) in Guyana,” says Aleksander Erstad, an energy research analyst in Rystad Energy.

While Rystad doesn’t expect any new awards this year, Reuters on Wednesday said that Petrobras was preparing to launch a tender to build Brazil’s largest-ever FPSO able to process 225,000 barrels per day, and targeted for deployment at the Buzios field.

Per Reuters, Petrobras plans to launch the leasing tender for the  FPSO by the end of August, and the competition for the FPSO is expected to take several months 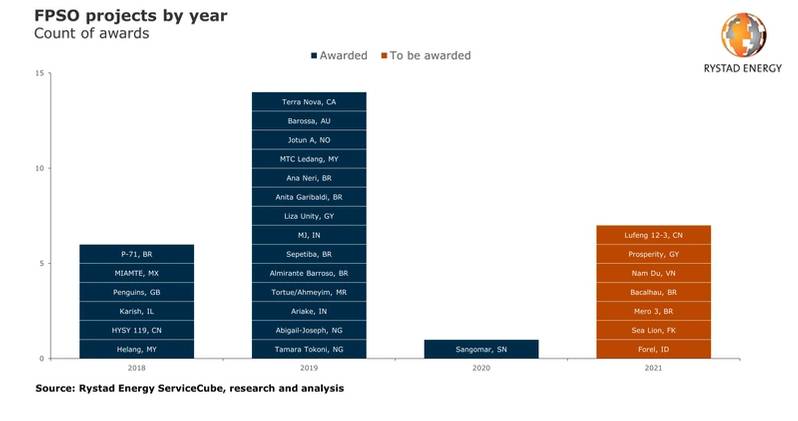 3 Oil & Gas Stocks to Add to Your Long-Term Portfolio

From fear in Wuhan to oil crash: Six months in emerging markets

SJRA: Damage from illegal oil dump in Crosby could cause over $1 million in