For decades, Mukesh Ambani’s empire has been supported by the energy flank he inherited from his father.

But when Ambani faces shareholders at Reliance Industries’s annual meeting on Wednesday, he’ll be speaking on behalf of an empire that is increasingly breaking free from oil-price fortunes. The billionaire’s string of deals with Facebook and other Silicon Valley players this year have propelled Reliance into the e-commerce and technology space like never before.

The stock has more than doubled since a low in March to a record as Jio Platforms, Reliance’s digital services business unit, netted almost $16 billion in a fundraising blitz. All this at a time when sentiment in the oil market remains fragile even after prices have recovered from a two-decade low. 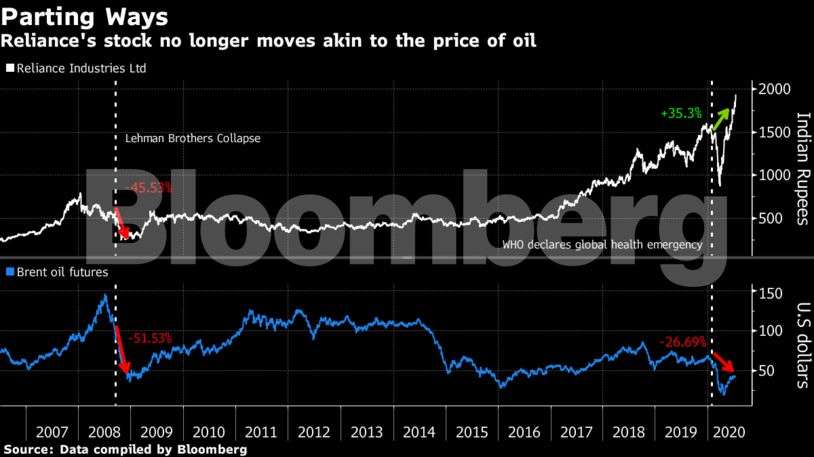 The flurry of deals for Jio have backed Ambani’s ambition to morph Reliance from an energy company to an e-commerce giant. They’ve also reduced oil’s influence on the company’s stock price. The company’s shares have a beta of 0.14 with Brent crude now, meaning a 1% weekly drop in oil causes no more than 0.14% fall in Reliance. This factor was as high as 0.7 during the 2008 meltdown, data compiled by Bloomberg show.

Jio is at the center of Ambani’s drive to create a homegrown version of Alibaba Group. The tie-up with Facebook has given the venture a Silicon Valley stamp of approval and has lured a dozen investors, enthused by the unit’s potential to shake up online retail, content streaming, digital payments, education and health care in a market of 1.3 billion people.

“Business-to-consumer sectors like retail and digital are more resilient to economic shocks,” said Harsh Dole, an analyst at India Infoline Finance Ltd. “These sectors fetch a premium return for valuation. The stock has been a beneficiary of that, no doubt.”

Facebook, which paid $5.7 billion for about 10% of Jio Platforms, has said it expects the tie up will make WhatsApp the primary way millions of India’s small businesses connect with customers. The messaging app has roughly 400 million users in the country, about the same as Reliance Jio Infocomm’s subscriber base for wireless services. 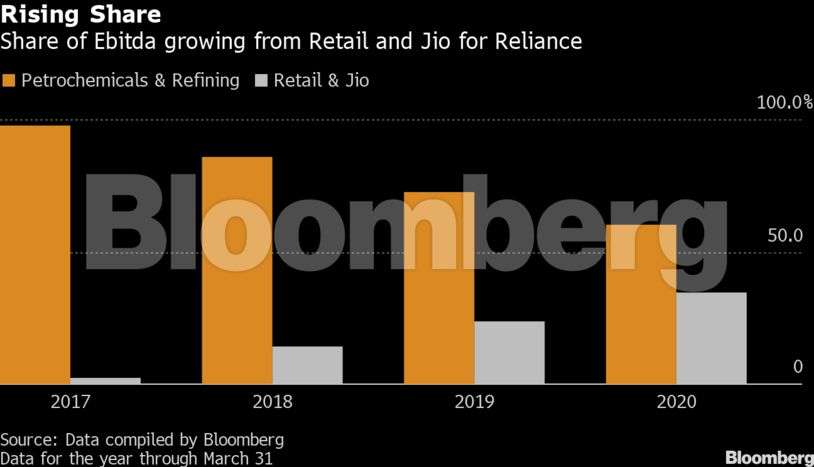 All told, the sale of 25.2% stake in Jio along with the $7 billion rights offering to Reliance shareholders allowed Ambani to declare his flagship free of net debt earlier than the March 2021 target. Last week, BP Plc paid $1 billion for a 49% stake in the company’s fuel-retail business, completing a deal announced in 2019. Reliance said it had net debt of 1.6 trillion rupees as of March.

The diversification has begun to trim the company’s dependence on the cyclical energy-related businesses. Petrochemicals and refining, which made up almost all of Reliance’s earnings in 2017, has since shrunk to 65%. The contribution from digital and retail businesses has increased threefold during the period. 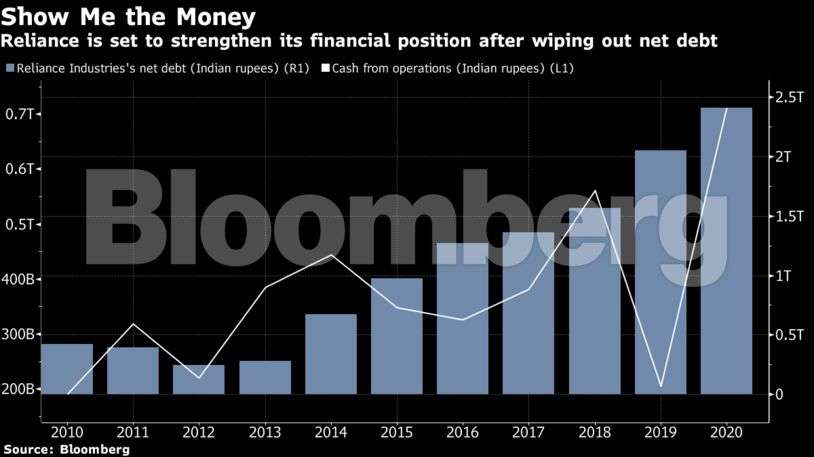 Not all analysts are sounding the all-clear for Reliance just yet.

On paper, Reliance is ‘net debt zero’ ahead of schedule. In reality, about 75% of the rights issue funds will come in next year. Macquarie…