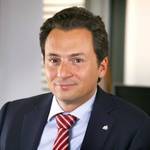 A former boss of Mexican state oil company Petroleos Mexicanos arrived back in Mexico on Friday where he will face an initial court hearing to answer corruption charges that could engulf leaders of the last government.

Emilio Lozoya, who was extradited back to Mexico from Spain overnight, faces trial for alleged bribery and money laundering offenses dating back to his 2012-16 tenure in charge of the firm known as Pemex.

Shortly before 1 a.m. local time, a plane carrying Lozoya landed at the Mexico City airport, media reported. The aircraft remained in a hangar belonging to the Mexican attorney general’s office for more than two hours, according to media and television footage, as journalists waited to capture the first images of Lozoya back on Mexican soil.

Once a rising star of Mexican politics, Lozoya has become a key witness in President Andres Manuel Lopez Obrador’s drive to expose graft in and around the government he took over from his predecessor, Enrique Pena Nieto, in late 2018.

Under Mexican law, the 45-year-old Lozoya must make an initial statement to a judge after entering the country.

That first court hearing should be on Friday, a Mexican official said, speaking on condition of anonymity.

Scion of a political family and former luminary of the annual World Economic Forum in Davos, Lozoya has agreed to shed light on alleged acts of corruption under the government of Pena Nieto, according to Lopez Obrador.

That prospect has sparked speculation in Mexican media that Lozoya will make damaging revelations about ex-colleagues and politicians to reduce any possible sentence. Pena Nieto denies wrongdoing.

In exchange, they contend, Lozoya awarded contracts to the firm as boss of Pemex and also took money for contracts from Mexican steelmaker Altos Hornos de Mexico.

Prosecutors allege that while at Pemex, Lozoya spent some $450 million renovating and acquiring an out-of-service fertilizer plant from Altos Hornos de Mexico.

Lawyers for Lozoya have said he acted under the orders of Pena Nieto.

Lopez Obrador has shied away from pointing the finger directly at Pena Nieto.

But the leftist leader has suggested that Pena Nieto’s landmark 2013-14 liberalization of the energy market, which Lopez Obrador strongly opposed, was tainted by corruption.

https://www.cuereport.com/Mobility Management by Oil and Gas Market by

IEA sees largest drop of oil demand in history this year, before

Venezuela opposition to probe possible resale of oil by Cuba

Amazon salesperson’s pitch to oil and gas: ‘Remember that we actually