The riverboat captain is a storyteller, and Captain Don Sanders will be sharing the stories of his long association with the river — from discovery to a way of love and life. This a part of a long and continuing story.

Last week we left the CLYDE and her crew, Captain Tim Roberts and deckhand Rick Welton, at Paris Landing, Kentucky, Mile 66, their first night on the Tennessee River. Ahead lay more than 600 miles of river, most of it water impounded behind mighty concrete and steel dams constructed by the Tennessee Valley Authority, the TVA, in the 1930s and ‘40s to bring prosperity through electricity to cities, rural communities, and farms in the Valley of the Tennessee. 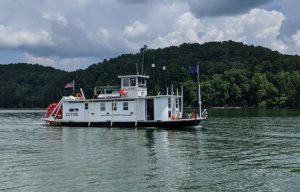 Overall, a nice boat, unique and fun, she is somewhat limited by her power, speed, and maneuverability, especially in heavy current or wind.

The next morning, Friday, 17 July 2020, Captain Tim left Paris Landing as the sky began to brighten before the sun peeked above the horizon. By 2 pm, Central Daylight Savings Time forever referred to as “boat time” for the rest of the voyage, the CLYDE was below the CSX Railroad Bridge at Mile 100 with an average speed of 4.16 mph. I guesstimated the mean rate based on CLYDE’s 8:45 position (Mi. 74) and the CSX Bridge (Mi. 100). Twenty-six miles in 6.25 hours, or 4.16 miles in one hour. The Rafter CLYDE may not be a speedster, but like the tortoise, she’s “slow and steady.”

While I had the opportunity, I messaged Cap’n Tim asking what he thought about the CLYDE now that he “knew her.” He shot back:

“Overall, a nice boat, unique and fun, she is somewhat limited by her power, speed, and maneuverability, especially in heavy current or wind. The current, below the dams on the TN River, the water can be quite fast at times. I hope we are lucky enough to miss those situations.” 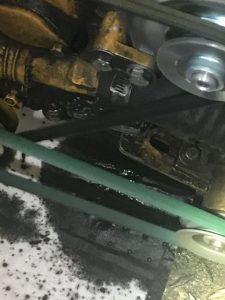 ‘We have developed an oil leak. We are going to have to shut down every couple of hours and check.’

I replied: “Though CLYDE was built as a weekend boat to putter around, you and I have pushed her envelope. The trip from Alma in 2012 was harrowing at times. One of the reasons I sold the boat to Julie was I knew the CLYDE couldn’t fight her way alone up the Mississippi to St. Louis as some prospects had to do if they bought her. Once the boat gets home, she should settle into friendly territory.”

Captain Tim, again: “Yup, I understand. Just wanted to be honest. I’m sure Julie will enjoy her. We have been fighting the wind and current the whole way. I’m looking forward to a calm day.”

But the next morning, Saturday, 18 July 2020, the captain messaged: “Underway at 0530. We have developed an oil leak. We are going to have to shut down every couple of hours and check.” 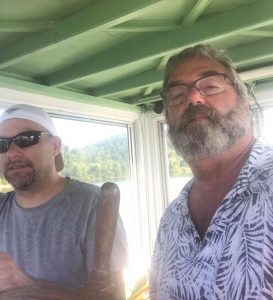 6:30 a.m. “A significant leak developed after one hour. I put the Pig Mat…

Read More: The River: 600 river miles to go, CLYDE is ‘slow and steady,’ gets an oil

Chinese firms may halt use of oil tankers that visited Venezuela